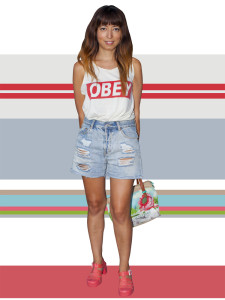 Bruno Morais, the Brazilian photographer that will be presenting his series Paletas in the second edition of SAN JOSÉ FOTO talked, among other things, about his beginnings in photography, the concept behind his project and the role of photography in discussions related to gender.

How did you get started in photography?
The road was transversal [laughs], I already knew a little about photography but did not take it too seriously, I felt some reluctance to the image. In the Faculty of Physical Education I became involved with a Folkloric Dance Company that travelled throughout Brazil doing researches. They had a photo archive that was maintained by the members, but at that time there was no one photographing. We came with the idea of re-activating the archive to make it work again so I ended up taking the responsibility. That was how I started.
The first time I saw the pictures I had made, I felt something different. They expressed more about me than anything I’d done before. Anyway, it was not right away that I decided to leave everything to start photographing. I trained in PE, I continued teaching, I went to study at another university and at that time, I was determined to live from photography. About seven years ago I left everything that had no relationship with photography.

It was at that time that Pandilla collective emerged?
Yes. The Collective Gang was founded by me (Bruno Morais), Léo Melo and Américo Junior. Creating the group was a radical change. It broke the paradigm of photography as an individual production. Sharing the photographic act was very important to me. The group also reduced the level of self-centeredness, there is no more “my picture,” it is the picture of us all. In many works we don’t use individual credits for the image. In some we even share the camera. We try to make a photography that is not so literal, or explicative. Our relationship is so strong that apart from the images, we had influenced us as individuals. It is already six years together and four concluded projects.

Can you tell us more about your work Paletas that will be featured in SAN JOSE FOTO 2016?
The idea arose in a conversation at a bar [laughs]. A woman passed walking down the street and she looked like taken out of a walkway. That fact led to a discussion at the table about how fashion and trends emit signals that go way too far. Shortly after, another woman with a different combination passed, so we entered in a new discussion of how people do not passively accept fashion, they also re-combine and re-signify it. At that time I thought maybe I could do some work about that. I chose to photograph only women because they end up being the audience for that fashion market. Not only as consumers, but also as supporters of an idealized feminine aesthetic.

I did not want to talk about it in such a documentary way, but take it to a more humorous place. I like to treat some issues lightly. I think that serious photography, especially documentary, can ward off some people from the discussions. There are those images that somehow explain everything at once, without giving chance to argue against them, and there are the others that are going through a very conceptual side and people fail when participating because they do not understand.
So, I wanted to create an image that arouses a debate, but without imposing a conclusion. I decided I would do portraits, did some tests and came to that format with the colors of the palette behind the person. After having defined the format I went outside and portrayed the people saying that I was developing a project on fashion. To select the subjects, I looked for combinations that stayed out of the usual. I have already made portraits in Cuba, Quito, Rio de Janeiro and California, but the work still continues!

The theme of the second edition of the festival is Gender. What is the role of photography in this discussion?
I think the role of photography in any area is to create instability, to create balance and to never give a hard, closed opinion. Whether the discussion is on gender, on police violence (an issue we are now working with the collective), or any other. I think the good thing about photography is that it can create uncertainty, doubt, make the people curious. I think that we have lived a long dictatorship of the image that wants to explain everything at once and is only pushing people away. Although everyone is shooting more, I see them far from photography. It is a curious paradox for me.

As a photographer, what is the importance of festivals for you?
For us, the members of the collective, participating in these events is still part of a slow process. This year was really interesting because we participated of FotoRio with a group exhibition at the Museum of National History, with other photographers who have been working for a long time. This year both Américo and me, decided to show more individual works and the fact of being chosen by Cristina to participate of SAN JOSE FOTO, is a great experience. I have been going to festivals for some time now, and it is always interesting, but having your work exhibited and being able to discuss with people about it, is ver enriching. It ends up projecting you to new possibilities.

You are working with Cristina de Middel, in a project on the figure of Exu. Can you tell us more about this idea?
The second time she was here in Rio de Janeiro working on her project about prostitution, I participated in the production and she told me she wanted to know more about the religion. I ended up taking her on a tour of Exu. She liked it and wanted to know more about that figure. I explained her what I knew and started thinking about this tradition that came from Africa. While in Haiti, she saw something too, a similar figure. Then we began to develop a project on the travels of Exu from Africa, passing through Rio and going to Cuba and Haiti. I have a friend that is a researcher and we made the proposal to write a story that would work as a script to illustrate this story. We took some pictures in Cuba and we are thinking about how to continue.

Are you planning to develop a project in Uruguay?
I want to continue doing some portraits for the series Paletas. I always try to develop a project when traveling. I have read a lot about Uruguay and there are interesting topics such as the legalization of marijuana, but I do not like to define a project so soon, I prefer to give space to the experience I will have there and I’m sure SAN JOSE FOTO is going to be wonderful.

Bruno Morais is a Brazilian photographer founder of the Colectivo Pandilla in Rio de Janeiro and member of the Imagens do Povo.